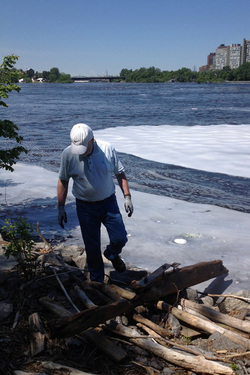 Several Lowertown residents volunteered for the Ottawa Riverkeeper's May 2013 shoreline cleanup.
Lowertown is fortunate to be bordered by both the Ottawa River and Rideau River, so it is important to us to clean up our rivers.

Our community association has partnered with groups including Ecology Ottawa, the Ottawa Riverkeeper, the Ottawa Rowing Club and others in annual shoreline cleanup events.

But this is not enough. Every time it rains, a cocktail of contaminants--including bacteria, chemicals, fuels and heavy metals--washes off our streets and runs straight into our rivers and streams via the underground storm sewer system. This amounts to hundreds of millions of litres of sewer water tainted with untreated sewage being dumped directly into the Ottawa River. The City of Ottawa has a plan to stop this and LCA residents joined 10,000 Ottawans in signing a petition ensure there is funding available to implement the plan. The City has asked the Federal Government and the Provincial Government to each contribute a third, and LCA contacted our representative MPP Madeleine Meilleur to do so. The Ontario provincial government agreed, including it in the budget in 2014.  We also contacted MP Mauril Belanger and the federal government has indicated they will do so in the 2015 budget.

LCA is also encouraging the City of Ottawa to follow-through on its commitment to develop a Water Environment Strategy that will improve storm water management, reduce flooding, protect our streams, and make it safer to swim and fish in our rivers.